When Lottie Pogson noticed her cat had a lumpy nose, she had no idea that such an innocuous symptom could be life-threatening.

Black moggy Tilly came to live with Lottie at her home in Burton-on-Trent, Staffordshire, when she was just a kitten, in May 2009, along with her sister, Trouble. Apart from being on the small side, Lottie says that Tilly had always been a normal cat, with no apparent health issues.

But then, in November 2017, Lottie started to notice that Tilly’s nose didn’t look quite right. She explains: “It was such a minuscule thing, and in most light it just looked like her nose was wet. But, on closer inspection, it was quite bulbous, and something was definitely sticking out from her nose.”

Lottie’s best friend, a very experienced vet nurse, had a look at Tilly, and said that her nose needed looking at right away, as she suspected cancer. The first vet who saw her the same day didn’t have the same concerns, so Lottie sought a second opinion.

This time, it was recommended that her nose needed investigating quickly. Lottie adds: “Had my friend not mentioned cancer when looking at her, then it may not have been treated as soon.”

A week later, Tilly had a fine needle aspirate (a sample of skin taken from the lump on her nose), and the results of that test showed she had melanoma — a malignant tumour associated with skin cancer.

As Lottie’s vet didn’t offer the treatment that Tilly would require, she was referred to the Willows Veterinary Centre and Referral Service in Shirley, Solihull, under the care of specialist vet James Elliott.

Lottie says: “It was a very quick turnaround. Within days we were booked in for CT scans and more fine needle aspirates to check the diagnosis, and to also check her lymph nodes. The day after the scans and tests were carried out, we had confirmation of the melanoma diagnosis, and the unfortunate news was that the lymph node tests had come back with some abnormalities.”

Tilly was booked in for surgery to remove the tumour and her lymph nodes to make sure that all of the cancerous cells were gone from her body. This would involve most, if not all, of her nose and part of her lip being removed.

“We were terrified,” says Lottie. “We were going to do it, but we didn’t know if we were doing the right thing — was it going to adversely affect her? Would she choose it if she had a choice? Would it affect her quality of life?”

But Lottie had Tilly’s best interests as her top priority, and even researching photos of cats who’d had similar treatment didn’t put her off. She says: “It didn’t matter to us what Tilly looked like; she’d always be Tilly. Appearance doesn’t mean anything, and I didn’t want her to be in pain. We went ahead, and thank goodness we did.”

The majority of Tilly’s nose, as well as the lymph nodes, were removed. The lymph nodes showed signs that the tumour had spread, which made Lottie even more relieved that they had gone ahead with the surgery.

Tilly also received a course of ONCEPT vaccinations, a pioneering treatment which stimulates the immune system to target just the melanoma cells in the body. It has no side effects, so is kinder to the body than chemotherapy. 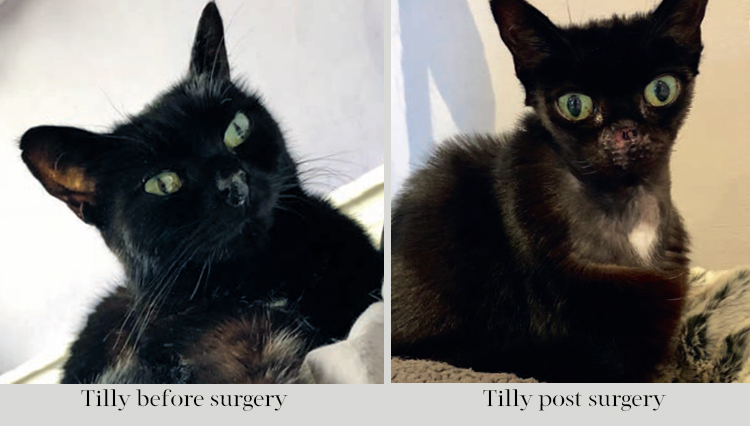 Tilly recovered quickly, and, after spending three days in the vet’s surgery, she was able to go home, wearing a surgical collar — much to her annoyance!

“The worst thing about recovery for Tilly was the cone she had to wear. It was a necessity, of course, because if she’d knocked her nose then there wasn’t skin to be able to fix any damage she did, but she coped,” recalls Lottie. “She didn’t attempt to disturb her stitches once, which I thought was pretty good, but the cone still had to be on for four weeks and I think she rejoiced once it was off for good!”

So far, Tilly seems to be coping really well with her different facial features, and the only apparent sign that something is different is that she sneezes when she has a drink, possibly due to water getting into her shortened nasal cavities, but this doesn’t seem to bother her at all.

Tilly has recently received her last dose of the ONCEPT vaccine, and is due her next check-up in six months’ time. Surprisingly, Lottie says that Tilly has become much more affectionate since her ordeal: “She’s much more loving now. She’s always been quite stand-offish because she’s so independent, and now she really wants to snuggle up with us. She always sits with me now, and I wonder if it’s because she realises that we’ve helped her?”

Tilly’s treatment costs ran into thousands of pounds, and Lottie says she will be eternally grateful, and relieved, that Tilly was insured: “I’d like to highlight that insurance is so, so important. We’re with Petplan and have their lifetime cover; Tilly wouldn’t be here today, or would be very, very ill, without them.”

James Elliott, European specialist in small animal oncology at the Willows Veterinary Centre, which treated Tilly, says: “The main thing when treating cats with melanoma in the nose is it is difficult to remove the mass without causing cosmetic change to the features, but the surgery went well, and we will have to wait and see how effective the ONCEPT vaccinations have been.”

SIGNS AND SYMPTOMS OF MELANOMA

Melanoma in cats is quite rare, and white or pale-coloured cats are most at risk. However, it’s important for owners to look out for any black lumps on their cats’ bodies, especially on the head and face.

Signs of melanoma include patches of damaged skin that can look like sunburn, which may then turn into a scab, and the tissue may then manifest into a lump on the skin.

Consider protecting your cat from the sun’s harmful rays by applying suncream to his ears and nose before he heads outside, and also keep white cats indoors on very hot and sunny days to be on the safe side.