TV historian and novelist Kate Williams is enjoying being a first-time cat owner. Alison Gallagher-Hughes sat down to chat with Kate as they discussed love letters, opaque tights, and a water-loving feline…

Professor Kate Williams may have to ditch one of her favourite fashion accessories — her black opaque tights — but having recently adopted two beautiful long-haired cats, it’s a hit that she’s prepared to take.

“Everything I own is now covered in fur — everything. I have had a love affair with black opaque tights ever since I was about 15 or 16. I wear them all the time, with every outfit, but I feel that the love affair may shortly have to end,” she laughs.

The flame-haired historian and TV presenter is now a first-time cat owner and admits that she recently made a “rookie error.” A black dress and coat were returned spotless from the cleaner — and then she added a scarf. “The scarf had cat fur on it, so it was immediately transferred to everything else I was wearing,” she explains. “It was everywhere. I can see it floating around in the air now!” 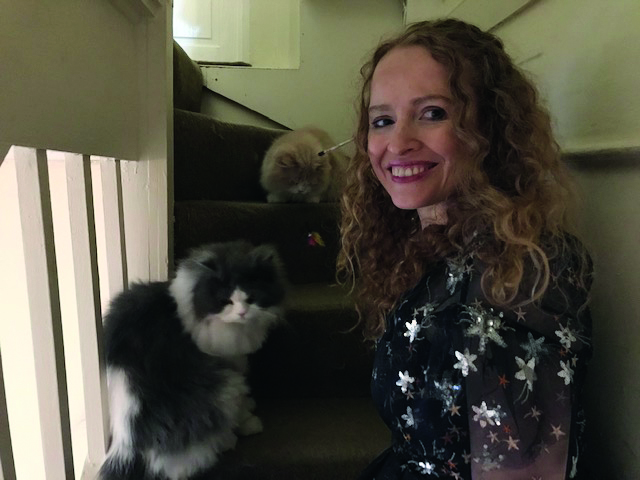 Kate first graced our television screens over 15 years ago. While doing her PhD at Oxford, she was writing a biography of Lord Horatio Nelson’s famed mistress Lady Emma Hamilton. It coincided with the 200th anniversary of the Battle of Trafalgar and she got a call asking her to appear on the ‘Richard and Judy show.’ From there it snowballed.

She’s now a regular guest on television and radio news programmes, and has appeared as a social commentator for some landmark moments: the 2011 Royal wedding of William and Kate, the Scottish Referendum, and Brexit. She has fronted a number of documentaries
— on the Stuarts, Queen Victoria, and Edward VII — and guested on many others.

While some historians rigidly remain within the constraints of ‘intellectual programming’, Kate has migrated to mainstream TV, flying the flag for history and encouraging awareness in a subject for which she is clearly passionate. She frequently appears on entertainment shows such as the ‘Great British Bake Off’, ‘Gardeners’ World’, ‘Celebrity Mastermind’ (she won), and Richard Osman’s ‘House of Games.’

She speaks with a rapid excitement and enthusiasm, reeling off dates and names of people and places with a whirlwind dexterity. And despite being a revered academic (she is Professor of Public Engagement with History at the University of Reading), she fervently believes that history is for everyone.

“There’s history in every inch of the United Kingdom and all history is important, whether it is researching your family tree, the home you live in, or the village, town, or city you are from. We need to look at history and question whose voices aren’t being heard? Women, people of colour, the LGBTQ community — so many stories are excluded from history because it has been chronicled by a certain type of man, of a certain age, a certain background, a certain attitude, or certain politics. I feel strongly that history is for all of us, and all our stories matter,” she insists.

Part of her raison d’être is to ignite a love of history in young people. In fact, our interview takes place over two sessions in between which she visits a London boys’ school to talk on the monarchy and the media.

Indeed, for Kate, a love of history and animals emanated from childhood where she grew up in Stourbridge, West Midlands.

She would also spend time on her grandparent’s farm in Wales which had a house cat and a sheep dog. More recently, Kate, who now lives in London, adopted two British longhair cats, Buddy and Summer, from the Blue Cross, a charity for which she is an ambassador.

“They are brother and sister, and we’re so thrilled to have them. My other half said he wanted a short-haired huntress and we ended up with two adorable long-haired. We don’t mind that there’s cat hair on everything. Perhaps it was time to give up the black opaque tights anyway. I’ve a copy of that book ‘Crafting with Cat Hair’ so maybe I should make something,” she muses.

The cats settled in quickly as Buddy and Summer were out of their carry case and exploring their new home before the Blue Cross volunteer who dropped them off managed to leave.

“They have clearly had a lovely life. They were used to being picked up and not frightened of visitors. They are quite happy to sit with me while I am writing and love attention. We are so incredibly fortunate.

“Summer’s definitely in charge. I’ve noticed that Buddy tries to please her, although occasionally he does try to steal her food, but they’re just such great companions. I get more likes on Twitter for pictures of me with a cat than I ever did for anything else. We play with them a lot but they play with each other too. Buddy also loves water. He likes sitting in the sink and the shower,” she reveals.

Kate has been a Blue Cross supporter for some time and she actively champions its initiatives which included writing a love letter to Buddy for its Yours Furever campaign around Valentine’s Day. Being a cat owner has prompted Kate to think more about cats through history.

“It’s fascinating, we think about the ancient world, the Greeks and the Egyptians had cats but they have fallen in and out of fashion, particularly during Tudor times, as people thought they spread the plague.

“There is a fear of cats and their association with the devil and it’s strange because they are the most majestic animals, and yet you see them becoming feared and linked to an obsession with witchcraft. Perhaps it’s due to their independence, because they go out in the dark or have what are considered to be feminine associations.”

I put forward the theory that maybe a feline association to feminine was reinforced by patriarchal religions in an effort to distance its doctrines from early female-dominant faiths and societies (I was clearly firing on all cylinders!).

“Indeed,” she attests. “In 1484 Pope Innocent VIII declared cats unholy and condemned them to death, but you continue to see them in family portraits so there’s clearly an endurance in the human-cat relationship. For example, Federico Barocci painted ‘Madonna del gatto’ in 1575, with John the Baptist depicted playing with a cat at the bottom of the picture and Leonardo da Vinci, he painted a lot of cats as well. So, you see a lot of cats popping up in popular culture despite the hatred.”

Kate is the author of five history books, the most recent, ‘Our Queen Elizabeth.’ She has also written four novels.

“I really enjoy it,” she says. “Writing fiction is just a different way of approaching history. It’s still based on historical research but the joy is you get to hear people speak in a way that you can’t when writing a biography. In my first book about Emma Hamilton, she ‘told’ me loads of stuff because she wrote so much. But there are still some things excluded from her narrative. There’s some sensational content missing like the time she met Marie Antoinette. At this point, the French Queen is under house arrest so Emma is one of the last people ever to meet her but she barely writes about it: ‘I met Marie Antoinette and we talked’.”

During my conversation with Kate, we certainly talked — a stimulating dialogue which fizzed with enthusiasm for history…and a love of cats. Don’t ditch the tights yet Kate, there’s always lint rollers.