How one cat adapted to losing part of his tail Alison Gallagher-Hughes tells of how her cat had to have his tail amputated and delves into how cats can easily adapt to missing part of the limb.

At the height of lockdown, one of our cats, Wilfred, returned home with his tail at half mast.

He has always been a bit of a gadabout: he loves to explore the great outdoors and during the summer, he is often only home morning and night to partake of bed and board.

On his return that evening, his tail hung limply half the way down from the tip. My first thought was that he had been hit by a car or attacked by another animal. I gently ran my hands over his body and up his tail. He didn’t flinch. He appeared not to be in any pain and there was no sign of any other injury. 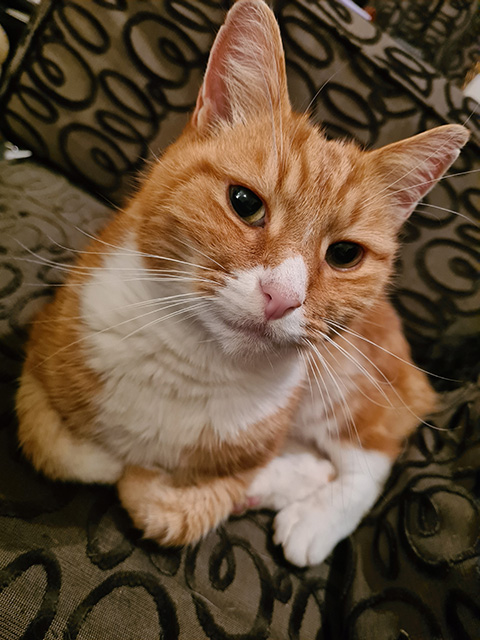 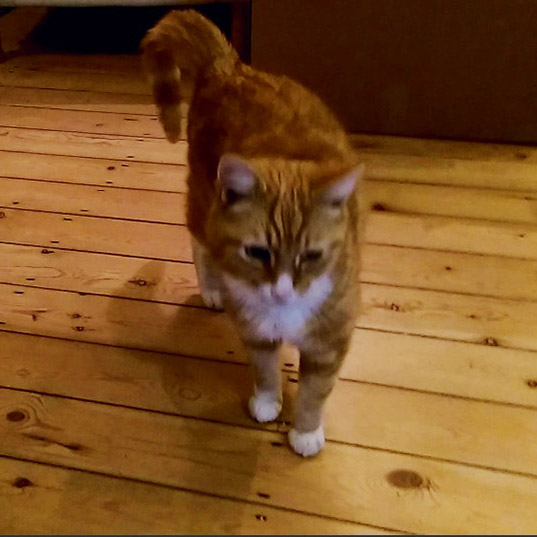 It was a Sunday night, ahead of a Bank Holiday Monday. He didn’t look like he needed emergency attention, but I wanted to be sure, so I messaged a veterinary nurse friend, sent her a little video, and asked her advice. She thought that he didn’t require immediate attention but recommended “keeping him close to home. The worry with tail injuries is if they have lost a bit of the sensation and it’s hanging in an odd way, they can get it caught and then get a little distressed,” she advised.

Tuesday morning arrived and we booked him in for a check-up. Wilf was given an X-ray and his 13th coccygeal vertebrae was broken, bitten right through — probably by another cat, based on the size of the puncture wound. It was recommended that his tail be partly amputated.

This was a bit of a shame as Wilf is a bit of a ‘looker’. All my cats are moggies and they are all gorgeous to me, but Wilf never lost those kitten-like looks; big eyes, rounded tips to his ears, and luscious long stripy tail. He is effectively Puss in Boots from ‘Shrek’ made real. He puts on the eyes, gives you a chirrup and you are overcome by cuteness overload.

However, he loves to roam and we didn’t want his tail to become an encumbrance, so agreed to the operation.

On his return, Wilf seemed unphased by his surgery. However, we were advised to keep him indoors for five days to allow the sutured end of his tail time to knit and for him to adapt to the reduction in the length. We managed about 24 hours before he made his bid for freedom and legged it out of the back door. His brief incarceration at least allowed the anaesthetic to wear off and later that day, he returned for a chow down and a bit of fuss. Wilf seemed super-chilled about
the whole thing and appeared to enjoy flicking his shaven, stick-like remaining tail around with glee.

Initially, we noticed that his tail looked a little more twitchy as he regained feeling but this calmed down within a couple of days. The wound healed perfectly and over time, the downy fur started to grow back and now he has a beautiful, bushy half tail. 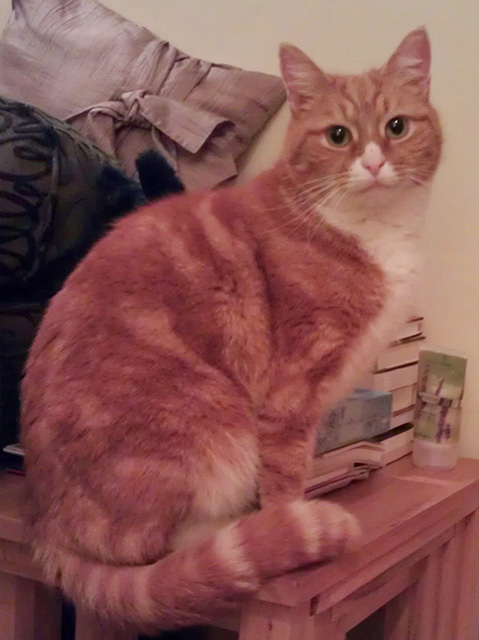 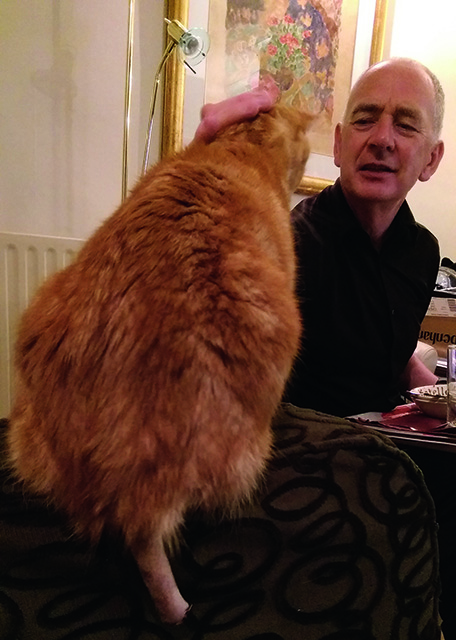 Images above (L-R): Wilf with a full tail. Wilf with his post-surgery tail. The X-ray of Wilf’s tail.

A cat’s tail is essentially an extension to its spine. As humans, we are among a rare group of mammals not to have one. Our ability to stand upright and walk on two legs means that the primary use of the tail — as a counterbalance to head weight — was no longer needed for our species.

The tail of the domestic cat consists of 18 — 23 caudal vertebrae, which become progressively smaller towards the tip. These are surrounded by six tail muscles on each side, for flexion, extension, and lateral movement. These combine to allow precise movements of each section of the tail.

Research undertaken by the University of Florida looked into the importance of a cat’s tail for balance and found that the tail responds to “mechanical, thermal, and electrical cutaneous stimulation”. These responses have evolved to protect the tail from damage. The study observed cats travelling across a narrow beam. When the beam was moved, the cats responded by rapidly moving their tails in the opposite direction. This readjustment helped them to realign their hips and keep them balanced.

Most amputations are performed after a cat suffers trauma to its tail. This can occur in a variety of situations: being caught in a door can result in the tail being ‘degloved’ (the skin pulled  from the tail bone), a tail pull injury — a dislocation which can happen when a cat’s tail is caught under the wheel of a car for example, or a fracture caused by a crush injury or animal bite. More rarely, amputation may be needed if tumours are present on the tail.

Daniella Dos Santos, senior vice president of the British Veterinary Association, says that the decision to amputate is not always necessary and it is dependent on the nature of any trauma.

“The extent of the trauma and where it is located will determine the requirement, along with the risk factor and potential for infection. If amputation is required, the cat would undergo surgery under general anaesthetic. In these cases, we attempt to remove as little of the tail as possible, but a sufficient amount to pull the skin over the end to suture and provide the best opportunity for healing and health of the remaining tail.

“Adequate pain relief is provided and recovery time is usually 7 — 14 days. An inflatable or conical pet collar is often used to prevent the cat from chewing its stitches and avoid the risk of infection. We also recommend that he or she is kept indoors for a few days so that the tail doesn’t get knocked and to help reduce the risk of infection or further trauma,” she advises.

In some cases of tail pull, the injury can occur much lower, towards the base of the tail. This dislocation can affect the sacral spinal nerves and result in the loss of bladder control and function. Signs may include a completely flaccid and droopy tail with no sensation. In these cases, immediate veterinary attention should be sought.

However, in most cases where amputation is required, cats soon learn to compensate and adapt. Manx cats, for example, are born without tails and yet are no less agile than their tailed counterparts.

“Cats are incredibly remarkable creatures because they are so adaptable,” adds Daniella. “Most will notice very little difference and carry on just as they have before.”

Cats also use their tails for communication. In addition to vocalisation. such as purring and meowing, a cat’s posture and movements are used as methods of communicating with felines and humans.

Tail movements can be an indicator of our cat’s mood but without a tail, we must try harder to interpret the subtleties of their language,says Anita Kelsey, feline behaviourist and author of ‘Let’s Talk About Cats’.

“The loss of tail may not give the cat guardian a complete picture of the emotions their cat wants to convey. However, other body language will make up for this: how they use their eyes, voice, and body. The cat will not try to compensate for the loss of his or her tail. In these circumstances, it is our responsibility to look a little harder, and learn and interpret other communication methods to appreciate how our pet is feeling,” she says.

Even with a tail, it can sometimes be hard to define the subtleties of what a cat is trying to convey. “It all needs to be put into context with what’s happening at the time, coupled with body language,” advises Anita.

Sometimes, our bond with our cats can help us read this behaviour better than others. In Street Cat Bob book ‘The World According to Bob’, a passer-by notices the street cat flicking his tail and interprets this as discontent at being ‘forced’ to accompany ‘Big Issue’ seller James Bowen at his pitch. The misinterpreted signal leads to intervention by animal welfare inspectors who have to be convinced that the ginger tom enjoys being there. As our Tail Talking section (right) outlines, tail flicks can be a sign of excitement or interest as much as annoyance, and tail signals must be taken ‘in the round’.

Of course, every tale benefits from a happy ending and Wilf appears no worse off for the loss of his tail. In fact, the TLC that he received during his recuperation seems to have reminded him that home is where the heart is, with him dismissing the call of the wild for a share of the duvet.

Tail Talking – what your cat is telling you with their tail

● Straight-Up — I’m happy to see you. If my tail is quivering, I am probably excited to see you.

● Straight-up with a hook at the end — not sure, I’m undecided. If I naturally hook my tail this may also be a friendly sign.

● Straight up and bristling — I’m agitated, angry, or afraid. I’m puffing up my tail to appear bigger than the perceived threat.

● Straight out and behind — I’m feeling content and not aggressive or frightened.

● Straight out behind, angled up and twitching — I’m indifferent to you, I don’t rate you or I am  not sure.

● Tail down — I am feeling defensive, submissive, scared, or unsure.

● Tail down and hooked-down or out at an angle — I could be ready to strike out if needed.

● Tail down and tucked under my belly — I am feeling submissive or very scared. I am trying to make myself smaller.

● Tail down, held out, and down at an angle — I may be feeling angry.

● Back and forth at the end — I’m feeling alert and interested or mildly annoyed!

● Flicking strongly from side to side — I am most likely feeling angry, excited, or irritable.