Remember Salem from the 90s sitcom ‘Sabrina the Teenage Witch’? One of the most famous cats to grace our screens, he may have looked like your regular black moggy, but, in reality, he was a 500-year-old witch sentenced to spend 100 years as a cat as punishment for an attempt to take over the world. He was portrayed by an animatronic and four cats in scenes with no dialogue. A talking cat, he regularly schemed to get his way, but he also had a soft side and he was often very funny. This suited the original, light-hearted show, back in the day when laughing tracks were played to remind you something was supposed to be funny, but nowadays, viewers’ tastes have changed. 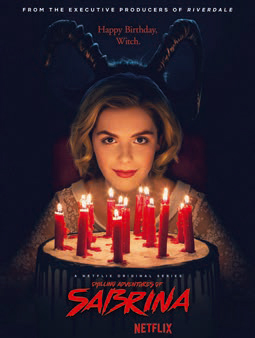 ‘The Chilling Adventures of Sabrina’ is not a remake of the 90s show. It’s based on a darker comic, inspired by the same universe and characters created by Roberto Aguirra-Sacassa, also the showrunner on the new series. There was much anticipation regarding the first season, which aired in October 2018. One major concern for lovers of the 90s show was Salem. Would he be back, and would he talk? The new Netflix show is brilliant and binge-worthy, and of course, Salem is back.

The new Salem doesn’t speak. At least not yet. Perhaps it’s better that way. I’d rather watch a real cat than a robot any day. He is introduced as a familiar spirit, belonging to a uniquely British folkloric tradition. Familiar animal spirits describe the animal companions who witches and cunning-folk used to work with from the medieval through to the early modern period. They were said to help the individual practice magic. In the new television series, Sabrina, on her 16th birthday, called out to a familiar spirit and Salem showed up. There are still many mysteries concerning this witch-familiar animal spirit relationship, and we can’t wait to learn more about Salem.

Roberto Aguirra-Sacassa made the call on hiring real cats to portray Salem. This meant bringing in trainers to work with the new animal talent. Ian Doig is the animal coordinator on the new series, assigning trainers to animals and finding animal talent, while Grace Macleod is Salem’s animal trainer.

“When we started Sabrina and needed to find cats for the role of Salem, it was far more difficult than we thought,” says Ian.

Black cats generally stay longer in animal shelters, partly due to superstitions associated with them, but Ian and Grace had a harder time than anticipated when scouting the perfect feline actors. “Very few shelters had black cats, strangely. If they did, the cat’s personality and emotional stability didn’t suit our needs.”

They eventually found Bobby, Boomer, Trevor, and Shaq. Each cat was recruited for its own unique talent.

“We found Bobby on Craigslist, of all places,” says Ian. “His previous owner was thrilled at this new opportunity and lifestyle he would have. His talent is his ability to work outdoors and even at night. Most cats would find this too scary.”

Boomer is a rescue cat the trainers adopted. “Again, the Washington state rescue was thrilled and check in with us often. His only shortcoming is he isn’t quite as reliable as the others and often finds himself waiting for his chance to shine. His part-time gig is helping us by raising kittens we have for other shows. He both enjoys and is good at that.”

The crew favourite is, apparently, Trevor. “Everyone asks about him,” says Ian.

“We have an on-set portable facility for the cats and as each person walks by, Trevor tries everything to get their attention. I drove on a 20-hour round-trip to get him from a rescue in Alberta. Trevor’s talent is fast moving or running outdoors. He loves it. He is somewhat smaller than the others, but you can’t tell when he’s in motion.”

Trevor may be the most popular, but the most devoted to his role is Shaq. “He is by far the most reliable and can be put anywhere as long as it’s indoors. He works outside too, as long as he just sits. He is stone-cold serious about his work and rules the roost at home with the other cats. His owner comes to visit him often.”

The Salem cats went through six weeks of training pre-filming and had additional training dictated by the script requirements. Grace is the head trainer and trains Salem, often with an assistant. Ian and Grace have thoroughly enjoyed working on ‘The Chilling Adventures of Sabrina’ with director Lee Toland-Krieger, whose style and work ethic they admire. Apparently, the cat actors seem to enjoy stardom, too. “They are very cooperative and enjoy the work as shown by their willingness to go,” says Ian.

When not on set, the cats live with Grace and Ian on their farm. They actually have their own purpose-built cottage with a ‘catio’, where they enjoy lounging outside and hanging out with their trainers on a daily basis.

The cat actors seamlessly blend into one another on screen in a rendition that seems effortless, a testament to their talents and their trainers’ skills. Salem is a believable, lovable character who we care about as much (if not more?) than we do about the other human characters.

Many were concerned to see Salem’s role so diminished in Season 2.

“Fear not,” says Ian. “In future episodes, his character explodes in a flurry of activity. Fans of Salem, be patient!”