Meet the cats of Westminster Peter Cardwell has spent his career working with Government. Here he takes us into the corridors of power and gives us the inside story of the felines of British politics.

The former US president Harry Truman once said: “You want a friend in Washington? Buy a dog.” Truman was correct in that politics can be brutal — and lonely — so there is little wonder why politicians sometimes seek friendship with our four-legged friends. But in Westminster, it’s not dogs, but rather the warmth of feline pawprints, that’s making a progressively bigger impression at the very top of British politics.

Westminster is a world I know well, as I was a journalist there for six years before becoming an aide to four different cabinet ministers — what’s called a special adviser. Along the way, I have met many a political cat and indeed, one of the best moments of my working life was being told that Gladstone, the Treasury cat, lived just moments from my desk. I popped up every now and again to say hello, and he was very friendly indeed. Alongside what looked like a very comfortable cat bed, he even had a little ceramic cat money box where people like me put in a few coins for his food and vet’s bills. The Government cats are all looked after at no expense to the taxpayer these days, so donations were always welcomed.

Sadly, for health reasons, jet-black Gladstone has been out of the Treasury for a few months now in quieter surroundings, but we all hope he will return before long, if that is judged best for his welfare. It’s a shame he has left Westminster, as the domestic short hair is known as the best mouser in Government. Treasury civil servants were even able to buy a mug with his photo on it, as well as Christmas cards with a photo of Gladstone on the front.

Better known than Gladstone is the Downing Street cat, Larry, a brown and white tabby. Like all of the cats in Westminster, Larry is a rescue, in his case from Battersea Dogs & Cats home. A feisty lad, he proved it wasn’t just politicians who squabble in Westminster — his clashes with Palmerston, the Foreign Office cat, were something I witnessed first-hand.

But when not fighting, Larry is tremendously lazy and very rarely runs after anything, never mind a mouse, but loves to show his ample belly and have it stroked. His favourite spot outside Number 10 is above the hot air vent just to the left of the famous black door, and inside the house, where I often went for meetings, he can often be found sitting on a chair or the window sill beside the door. 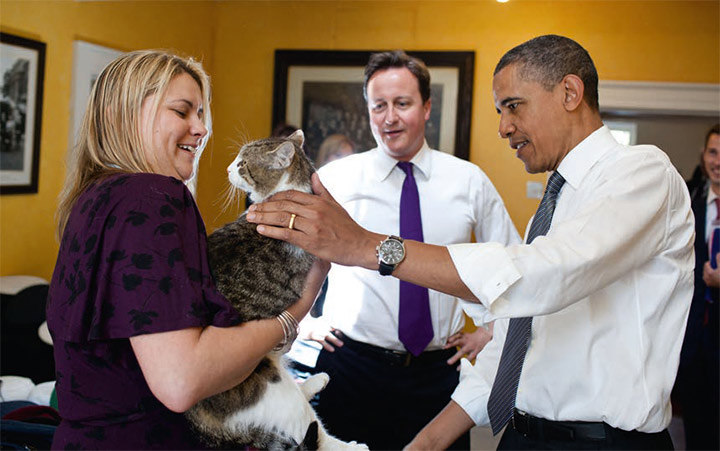 Larry’s had an uninterrupted run as chief mouser of the United Kingdom since 2011, but his rival Palmerston lasted less than four years at the Foreign Office directly across the road.

Named after the former Foreign Secretary and Prime Minister Viscount Palmerston, the cat’s original name was Leonard — the website BuzzFeed actually put in a Freedom of Information request to elicit this information.

Palmerston’s credentials were questioned, however, when former Foreign Secretary Philip Hammond was quizzed by Conservative MP, Keith Simpson, in May 2016. Simpson asked whether Palmerston had “been positively vetted by the security service and scanned for bugs by GCHQ?”

At the height of the Brexit debate, Simpson asked the then-Foreign Secretary: “Can you assure the House, and the more paranoid element of the Brexiteers, of Palmerston’s British provenance and that he is not a long-term mole working for the EU Commission?”

Hammond replied: “He is definitely not a mole, and I can categorically assure you that Palmerston has been regularly vetted. As for being a sleeper, he is definitely a sleeper, I am told very often in my office. His attendance record has been 100 per cent. My experts tell me that pretty much rules out the possibility of him being a commission employee.”

After his illustrious career, in July, Palmerston announced he was hanging up his collar as a Westminster cat. Ever the media-savvy moggy, he chose the eve of International Cat Day for his dramatic announcement on social media. We all miss Palmerston in Westminster, but of course wish him well for his quieter life in the Hampshire countryside. Enoch Powell said that all political careers end in failure, but I think Palmerston is probably an exception to that rule.

Palmerston never made any promises about catching mice — though none of the Westminster cats are as bad as Larry on this front — but Palmerston definitely did big things for Britain’s image abroad. Since he started at the Foreign Office, his over 100,000 Twitter followers have watched as many embassies throughout the world got their own diplo-mog. Palmerston also raised thousands for Battersea Dogs & Cats home, so never forgot his roots, helping other rescue animals not destined for high office. So I say, congratulations on a job well done, Palmerston.

Given that he recently left Westminster, I asked resident Your Cat expert Celia Haddon how Palmerston is likely to be settling into his new home in Hampshire.

“Cats usually hate any change in routine, though they adjust after a few weeks,” says Celia. “Palmerston has spent most of his evenings and weekends without much human company. The change will be that now he has humans at the weekends and evenings but probably not during the working day. Cats like predictability so with luck, he will be going into a new but predictable routine.

Larry has been mentioned many times in the House of Commons, not least in David Cameron’s final Prime Minister’s Questions as Prime Minister in 2016, when he said: “I can’t take Larry with me because the staff love him very much, as do I.” The cats are ‘owned’ by Downing Street itself, so unlike Boris Johnson’s Jack Russell cross, Dilyn, who belongs to him and his fiancée Carrie Symonds, they remain when their political masters change. 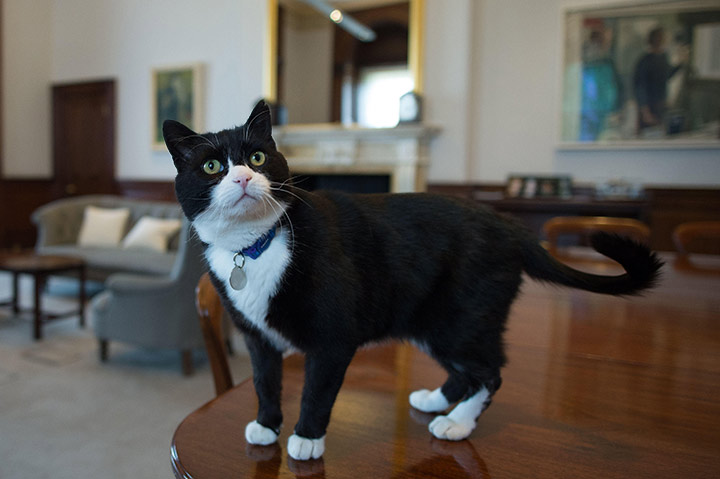 Palmerston before his retirement.

On the other side of 10 Downing Street is the Cabinet Office, which is the home of cats Evie and her son Ossie. They are less high-profile, but equally loved.

My friend Victoria Atkins, a Home Office minister, is as much of a cat nut as I am, and together we tried to convince the Home Office, where we worked together, that they definitely needed a cat. At one stage, Victoria even told the House of Commons about her own family moggy, which she said was “the most beautiful cat in the world.” But she had the house in uproarious laughter when she revealed her four-year-old son had named him. His choice of name? Gaston the Turbo Snail.

Cats have a long history in the corridors of power. They go back to Cardinal Wolsey owning a cat as Lord Chancellor in the early 16th century. The idea of a Chief Mouser, however, was born in June 1929 when a civil servant at the Treasury authorised the office keeper to “spend 1d a day from petty cash towards the maintenance of an efficient cat.”

The first Treasury cat was originally called both Smokey and Rufus, and served from 1924. He was a formidable mouser and ratter. The Chancellor of the day, Philip Snowden, was known to be parsimonious, but nevertheless saw Rufus/Smokey and softened, deciding the cat’s rations would be increased by 50 per cent. But a bill had to be passed in Parliament first to make sure this happened, leading the cat to have yet another name: Treasury Bill.

Later, a cat named Munich Mouser served alongside Churchill, a holdover from Neville Chamberlain’s administration. Munich Mouser would have spent time with Nelson, Churchill’s own cat. There were also three cats called Peter around Downing Street in the middle of the 20th century, with Peter The Third appearing on the BBC in 1958, having sparked a debate over his salary. He passed away in March 1964, receiving tributes from all around the world.

When Peter The Third died, the Lieutenant Governor of the Isle of Man offered to provide a Manx cat, without a tail, to succeed Peter. In 1964, a ceremony was held for the new cat and she was named Manninagh KateDhu, meaning Black Manx Cat. The Home Office renamed her Peta. She earned £13 a year, double what Peter The Third had earned. Peta reportedly got into a fight with Nemo, Harold Wilson’s cat, and in attempting to break the cats up, Mary Wilson was cut and reportedly had to cancel a dinner with the Italian Prime Minister. The Wilsons’ family cat, Nemo, a male seal point Siamese, moved into Downing Street after Wilson’s election.

In the 1970s, the black and white Wilberforce ruled the roost in Downing Street, and was apparently a terrific mouser. Edward Heath was Prime Minister when Wilberforce arrived from the RSPCA in 1974 and he served a further three Prime Ministers before retiring in 1986. Margaret Thatcher even apparently bought him a tin of sardines back from Moscow from one visit.

The following year, Humphrey arrived. He was named after Sir Humphrey Appleby of TV show ‘Yes, Minister’, after a ballot among Downing Street staff. He pleased Margaret Thatcher as he only cost £100 a year and was apparently more efficient than the previous pest control contractor, who charged £4,000. Humphrey was really the first modern day mouser and caught the public’s attention. On one occasion, King Hussein of Jordan was kept waiting while a police officer removed Humphrey from the red carpet. And poor Humphrey was nearly run over by Bill Clinton’s presidential Cadillac!

Humphrey went missing for three months after he wandered to the Royal Army Medical College and was found sleeping in the soldier’s quarters. This led to international press coverage and he even received a message from America’s ‘First Cat’, Socks, who belonged to the Clintons and was himself an adopted stray.

Humphrey was moved on once Tony Blair came to power, apparently because of Cherie Blair’s dislike of cats.

While Chancellor Alistair Darling’s cat Sybil lived at Number 11 for a short time, she did not settle. So it was not until the Conservatives got back into power that cats again became a feature of Downing Street life, with Larry’s arrival in 2011. The next year, George Osborne’s family cat, Freya, joined Larry, but roamed too far, so was retired to Kent in 2014.

More recently, the new Speaker of the House of Commons, Sir Lindsay Hoyle, proved he is clearly a huge animal lover. A parrot, turtle, the family terrier, and a Rottweiler are all welcome in the Speaker’s apartments, but the two cats, Dennis and Patrick, rule the roost.

While it’s true that UK politics can be a brutal place, that need not mean that our feline friends can’t be on hand for a stroke and a purr to calm down those rushing from Parliament to government departments in the business of running the country. I, for one, would have had much less fun over the past decade were it not for our furry friends who brighten up the day and occasionally gave me a little hug as I went about my work. But, much as Larry, Palmerston, Gladstone, Ossie, and Evie were great to encounter during working hours, my true love is my own rescue cat and best friend, Jack, who sleeps on my bed at home each evening.

Peter Cardwell is the author of ‘The Secret Life of Special Advisers’, which is published by Biteback. All images within this article are from the book.