Meet the cats who spend their lives at home in lighthouses Lighthouses play an invaluable role in sailors’ lives, guiding ships with their bright beams. There’s an air of romance and mystery about them too, as they are often remote and isolated. This romance is only enhanced, when you find out they are also ideal places for cats to live...

Maureen Schmidt has to call in her weather report from her remote Canadian lighthouse every three hours, starting at the early hour of 3.30am, seven times a day — and her cats Possum and Schnitzel love to help her.

“Schnitzel in particular loves to come with me to the radio room and office where I call in my reports, no matter what the weather is,” said Maureen. “We climb up and down five flights of stairs back and forth for each report and he will stay right by my feet and follow me into the office, sometimes even marking the weather books with his muddy paws, if I don’t catch him quickly enough!”

The beautiful setting of Estevan Point Lighthouse, in the wilderness of Vancouver Island on Canada’s west coast, hasn’t changed since it was built in 1908. It’s a remote location of wind, sand, and rocks, bordered on one side by the vast Pacific Ocean and the other by a sea of trees. There are few visitors to the area and it is so remote that Maureen has her groceries and post delivered once a month — by helicopter. 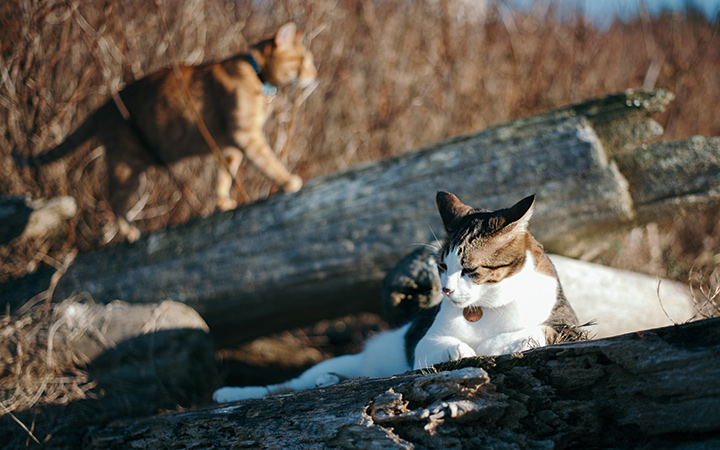 Above: Possum and Schnitzel

Over the years, Maureen has trained both cats, by using leads, to walk near her to keep them from danger: “We live in a very wild and remote part of British Columbia and there are cougars, bears, and wolves in our forests, so I need to be with them when they are outdoors to keep them safe. They are never allowed out at night because it’s too dangerous, but luckily, we have lots of grounds for them to walk in with me during the day. They love coming for a walk around the perimeter of the station with me each afternoon.”

Possum, a short-haired tabby with swirling patterns contrasting against his white, is seven years old and a big boy, weighing in at 22lb (10kg)! He is laid-back and loving, and likes nothing better than to snuggle up. Ginger tom Schnitzel, who is three, is much smaller with dainty feet with a few black whiskers dotted among the white ones. Schnitzel is the complete opposite of Possum: very high energy, always busy, quite vocal, and is not too keen on a cuddle. Possum can give a high five, while clever Schnitzel will do lots of different tricks like shake a paw, then shake the other paw, wave hello, beg and twirl — all for a treat or two — or three.

Possum was rescued from a farm supply warehouse where his stray mother had holed up to give birth to her litter. Maureen said: “I went in to buy supplies one day and left with Possum instead.” She spotted Schnitzel as a young kitten on the SPCA’s website and it was love at first sight so she made a four-hour round trip to bring him home. “Possum and he became friends literally overnight,” she said. “They were mutually grooming and sleeping together by the morning after I’d brought him home.”

Possum and Schnitzel have been living at the lightstation with Maureen since 2018. She said that they adjusted really well to their new home, although it took them a while to get used to the high winds that rattle and whistle through the windows during storms. The 100ft-tall lighthouse has a fascinating history. It was the site of the first enemy attack on Canada since 1871 when during the Second World War, a Japanese submarine fired on the lighthouse.

Many other lighthouse keepers on this coastline have cats said Maureen, adding that there was a deep kinship between the workers and their pets. “I think it’s the introverted, independent nature of us both — we understand each other. Cats also bring a feeling of comfort and calm to a home, like all is well with the world and everything is as it should be. Time stands still on the lights, just as it does when your cat is cosy and asleep on your lap — cats and lighthouses, they just seem to fit!”

Although they live in an isolated place, Possum and Schnitzel have many friends in the local community and around the world who love to follow their adventures through their Instagram account (@kittiesofthelights). Maureen added: “People really love them and it just swells my heart with tremendous joy to share their lives with others.”

Above (L-R): Hamish, Quizzy, and Jonesie

Withernsea’s Lighthouse is a massive 127ft tall (39m) and there are 144 steps to reach the top, but that doesn’t stop the resident cats from trying to climb up it.

“They go up the stairs and sit where they fancy,” said Lindsey Jones, manager of the lighthouse in Yorkshire. “We try to discourage them as they can get in the way of visitors, plus although cats have nine lives, we wouldn’t want them to lose any falling down the stairs.”

Hamish, Quizzy, and Jonesie all live in the lighthouse, which was decommissioned in 1976, after 82 years of use, and now is a busy museum. It features exhibitions of local history, RNLI and HM Coastguard exhibits, and a memorial to 1950’s film star Kay Kendall whose family was instrumental in maintaining the lighthouse.

All three moggies are strays who have landed on their paws in their new lighthouse life with warm beds, a garden to roam, and lots of visitors to fuss over them.

Tabby Hamish got his name from the very popular series of children’s books by Rona and David Armitage about a cat that lives in a lighthouse and gets up to all kinds of fun adventures.

“We have thousands of young school pupils come to visit us,” said Lindsey, “and they all look for the cats. Often, they’ve read one of the Hamish books so they particularly want to find Hamish and he’s very happy to be stroked by them. We stock the books in our shop and they sell like hot cakes!”

Lindsey said that Hamish, who is about 12 years old, is a very gentle, friendly cat. “He’s a people-cat and always wants to be wherever there are visitors. He will sneak into the café and sit on the chair as if he’s about to have something to eat.”

Hamish lives with pale grey Quizzy and ginger Jonesie. In the past, most lighthouses would have had cats to keep the vermin away, says Lindsey, so Withernsea’s trio are keeping up an old tradition. The lighthouse dates back to 1892 when it was built very quickly over a period of just 18 months after a high number of local shipwrecks.

Lindsey added: “Quizzy got her name as she has a very curious look on her face. She’s only about a year old and very, very mischievous, chasing things in the garden and getting up to all sorts of naughty things.”

Visitors to the lighthouse will often find that while they are sitting in the garden enjoying a coffee, Hamish or Quizzy will come to sit on their laps. Many returning visitors have made their trip specially to see the cats.

“They are so friendly and easy-going. For instance, I will be holding a meeting in the garden and the cats will just come and sit on people’s knees, looking for a fuss.”

Unlike the other two, Jonesie, named after the cat in the film Alien, prefers a quieter life away from visitors. Lindsey added: “We wouldn’t be without our cats. They are just lovely companions.” 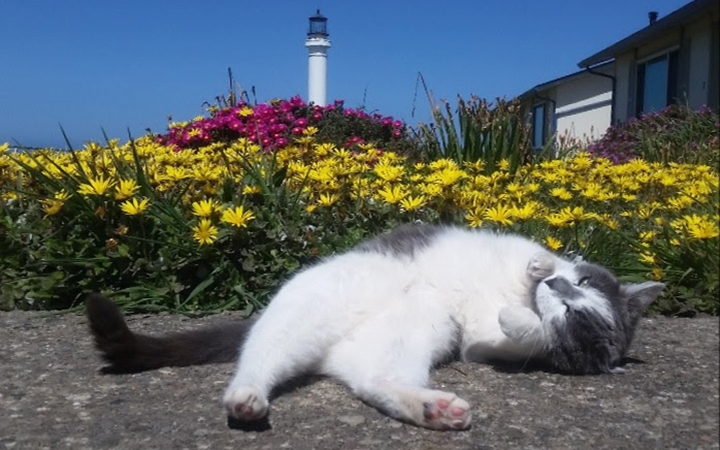 The light at Point Arena Lighthouse flashes every 15 seconds, 24 hours a day, 365 days a year to guide ships along the northern coast of California — and has done for the past 150 years. The lighthouse is a great place to catch sight of some amazing creatures: grey whales, humpback whales, southern resident killer whales, a rare blue whale, and a little cat called Arena Mina.

The white and grey cat has lived at the lighthouse, which has guest accommodation and a museum, since 2017 and has the official roles of guest relations manager and rodent control specialist.

“Arena Mina loves to go out to greet guests walking by. She will lay down and roll over for tummy rubs,” said Mark Hancock, the lighthouse’s executive director. “She will also hang out in our museum and sit on guests’ laps when they are watching our informational DVD or resting on the bench. She is awesome at catching mice and gophers, she often presents them as ‘gifts’ to me and our guests staying in our holiday cottages.”

The lighthouse team had unanimously voted to get a lighthouse cat and Mark was due to go to a local rescue centre to find the right moggy, when — out of the blue — Arena Mina turned up. The little cat was abandoned by the lighthouse’s water tanks, complete with cat carrier and food bowls.

Mark said: “She hid from us for a few weeks. We left down some food and water but she was scared. Then one day, she let me pick her up and she wouldn’t stop meowing, which I think was her telling me how awful it had been living outside with the raccoons, coyotes, and bobcats. I took her to my office, put her on my lap, and she didn’t move for a couple of hours, purring non-stop.”

A trip to the vet’s turned up a couple of surprises. The cat had already been neutered and was microchipped! The chip company traced her owners, who lived more than 900 miles away in Idaho and were happy for their cat, who they had called Baby, to stay and live in the lighthouse.

A fundraiser was coming up and the right to name the little cat was auctioned off for a grand total of $600. The winner called her Arena, after the lighthouse, and Mina after her grand-daughter Gelsomina — and from that day forward she was known as Arena Mina.

Arena Mina lives in the maintenance office at night and during the day roams the beautiful grounds of the lighthouse, which was first lit on 1 May, 1870. It was damaged beyond repair in the 1906 San Francisco earthquake and the current tower was built to replace it and was lit for the first time in September 1908. Mark said: “Arena Mina will also follow guests out to our gazebo peninsula, which really amuses them. She is like a dog in that respect. She also likes finding spots in the sun.”

Virtually every visitor loves the lighthouse cat with repeat guests asking where she is the moment they arrive, added Mark. “Arena Mina is super calm and mellow, and is really good with kids.”

One of the guests, Elisabeth Powell Redon, who married her husband at the lighthouse in 2005, loved the cat so much she wrote a children’s book about her, illustrated by Adriane Bosworth and donates all the profits to the lighthouse.

“We sell the book in the shop and it’s very popular, just like Arena Mina. She puts a smile on everyone’s face,” added Mark. “And Adriane made me a handsome 40-year-old, which I’m not, but makes me proud to be in the book!