Temperament Chinchilla cats are home-loving and friendly, very people-orientated, good with children and other cats and dogs

The Chinchilla, a breed from the Persian cat breed family, is a strikingly beautiful cat with green eyes that seem to be kohl-rimmed, giving them a slightly surprised look. The thick silvery-white fur makes him immediately recognisable as the feline companion of James Bond baddie Blofeld, who would curl up in his master's lap while world domination was being planned!

As well as being very attractive cats, Chinchillas are described by breeders as being very people-orientated; they will seek your attention and enjoy playing with toys. While they love plenty of fuss, they tend to prefer to jump into your lap and come for cuddles when it suits them. They are said to get on well with other cats and friendly dogs - and, while they do like to be top cat, they can find the livelier foreign cat breeds a bit overwhelming.

Despite having a slightly high-maintenance grooming regime, Chinchillas are said to be very relaxing to have around. They are loyal cats who tend to attach themselves to one or two people, and can be nervous around strangers. Although happy to live as indoor cats, they enjoy being able to go outside, which should only be in a safe, cat-proof garden that they can't escape from or, better still, a properly constructed run.

"I find that a lot of people who come to me for a Chinchilla kitten have owned Chinchillas before. They love the breed and can't imagine their home without one - that's the best recommendation any breed can have," enthuses Rosemary Fisher of the Chinchilla, Silver Tabby & Smoke Cat Society, who has been breeding Chinchillas for nearly 40 years.

How to groom a Chinchilla cat

It's hard to resist Chinchilla kittens as they are one of the prettiest in the cat fancy, but if you are thinking of buying a kitten, there are a few things to consider. Due to their thick, lustrous fur they do require regular grooming to keep them looking good, as Rosemary explains: "Grooming is not only combing but also includes care of the claws, ears and eyes. All Persian types require combing at regular intervals; how often depends on the coat texture and the season, but making a habit of daily grooming benefits all involved."

Getting to know and understand the texture of your Chinchilla's coat and starting to groom him when he is a kitten will get both of you into the habit. Check your kitten's overall condition daily, and spot any potential problem before it becomes a crisis. Sue Danks, honorary secretary of the United Chinchilla Association, adds: "Breeders should have started grooming when they are kittens, so if you just keep up with it the cat will stay in the routine."

Rosemary recommends using Teflon-coated combs as they tend to go through the coat better and take out less undercoat: "It's also important that the teeth of the comb are not sharp enough to hurt the cat's skin, but long enough to go all the way through. If you comb on a daily basis, so no knots develop, combing will not be associated with pain," says Rosemary. She also suggests shaking a little baby powder into the coat once a week, which will combine with the natural oil in the hair, and with further brushing acts like a dry shampoo. The idea is to separate the hair, making it nice and fluffy.

Rosemary continues: "Pay particular attention to potential trouble spots such as the flanks, back of the hind legs, stomach, under the chin and chest, and behind the ears, especially when the undercoat is shedding out. Some people, unknowingly, just comb the top fur of the cat's back, head and tail and find that the underside has become felted into a solid mat of dead fur."

If this happens, it will require careful removal with scissors or a trip to an experienced cat groomer, or if it is particularly bad, a visit to the vet to be clipped or combed out, usually under anaesthetic. After combing, you can brush the coat if you wish. Always brush the hair in the opposite direction to which it lies in order to get down to the roots. Fur around the neck should be combed and brushed up to form a frame for the face. Use a natural bristle brush and never use a brush made of nylon on a Chinchilla.

It sounds like a chore, but takes literally a few minutes a day and the handling and grooming can form a close bond between you and your cat, and more affectionate Chinchillas will start enjoy the attention.

Sue adds that the Chinchilla's eyes need to be kept cleaned with a regular wipe, as their white fur shows up any dirt straight away. Breeders agree that anyone who is not prepared to put in the time and effort to groom a Chinchilla properly shouldn't commit to having one.

Owners are also advised to take care with their choice of food. Sue explains: "They can be quite a high-maintenance breed with their diet as they have more sensitive digestion when they are being weaned. You should stick with the diet they are used to start with - the one the breeder has fed - and gradually change their diet as they get older."

Chinchillas have cobby bodies and short, thick legs with big paws. Their tails should be bushy and short, lying just before the shoulders when measured against the back. Their small ears should be well furnished and set wide on their broad heads, whilst their eyes - which should always be emerald or blue-green - should be large, round and expressive.

They have snub, brick-red noses, although not as short-nosed as other Persians. Their eyelids, lips and noses are outlined in black or dark brown. Chinchillas have pure white undercoats, which are tipped with black on the back, flanks, head, ears and tail to produce a shimmering silver effect. Blue-tipped Chinchillas are also recognised.

As well as the extensive brushing requirements, you'll need to make sure your cat's eyes and ears are clean. Keep his nails clipped too, and always ask your vet for advice if you're struggling with his upkeep. The Chinchilla is quite hardy and doesn't suffer from hereditary diseases, although kittens should be tested for Polycystic kidney disease (PKD). Rosemary adds: "Chinchillas need more care when they're weaning as they have delicate digestions. Stick rigidly to the diet instructions you were given by your breeder. As adults, they don't need a special diet but it's good practice not to just chop and change the food they're eating." 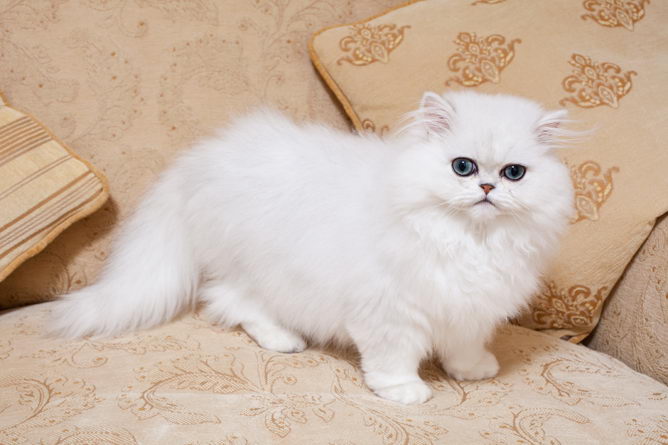 Pet-quality Chinchilla kittens cost around £500 and you may need to join a waiting list for your new addition. When choosing your Chinchilla kitten, make sure you meet mum and the other litter mates at the same time. Handle all of the kittens and check that they've been registered, socialised, vaccinated and tested for PKD. Check his ears, eyes and bottom are clean and check his coat for fleas.

Chinchillas are of the manmade variety and were developed from a silver Persian, Chinnie, who was born in 1882. She was the offspring of a blue Persian and an unknown stray tom. Breeders encouraged the colouring through outcrossing and Chinnie's descendants began looking like the Chinchillas we know now in the early 1900s. The first standards were drawn up around the time that The Chinchilla, Silver and Smoke Cat Society (the name has since altered slightly) was established in 1908. The breed standard itself hasn't changed very much since 1920. 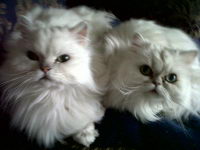 Having owned and loved Chinchillas for two decades, Kim Pendergast recalls her history with the breed so far.

"In December 1996, my life was transformed when I bought my first Chinchilla. I had never owned a cat before and had spotted a picture of a Chinchilla in a cat magazine. I just knew this was the cat for me and was mesmerised by their sheer beauty. I could hardly believe that cats like this existed!

"I was totally in love with my very beautiful boy Archy. I was a complete novice but came away with kitten food and written advice, and I was confident that I would be ok. This day was a turning point for me as I would always have Chinchillas in my life. Archy was very chatty and loved attention. He was great company and very entertaining; his speciality was the high jump and back flips. I was convinced he could jump higher than a Maasai warrior!

"Living in a flat without a secure garden, Archy was a house cat and I soon realised he needed a playmate. In July 1997, I bought his half-sister Lady Cheeta - she too was a beautiful cat with deep emerald eyes, the longest whiskers and the most magnificent tail. They were inseparable and it was not unusual to have the cats chasing each other while you watched TV, jumping over your head with perfect precision without so much as a backward glance! Cheeta was intelligent, very independent and determined. She reluctantly accepted cuddles and had a surprising weakness: she loved my singing!

"Sadly, in February 2012, Cheeta became ill and it was time to say goodbye. Archy had always been vocal but now it was off the scale. He stopped coming to bed and stayed in the lounge, howling for Cheeta. That June, I made contact with a breeder who was rehoming a retired female show cat, Trinity. Archy was very curious and couldn't wait to introduce himself. It was wonderful to have two Chinchillas again and the night-time calling stopped.

"Out of all my cats, Trinity is the most glamorous with her sea-green eyes, pixie ears, petite frame and graceful walk. On looking at Trinity's pedigree, I realised that she was related to Archy and Cheeta too, which was a nice surprise. April last year brought the sudden departure of Archy and my home became very empty and quiet. He was just two months away from his 19th birthday and I was truly blessed to have him in my life for that long.

"I could tell that Trinity needed a companion and so I went to Wiltshire to visit a new kitten. I called him Figaro and he lives up to his name: he is full of energy, inquisitive, and is able to undo the brackets of the shower door to open it! He gets absolutely everywhere. Figaro has a lovely temperament and has good vocal ability so he's becoming a chatty boy. Chinchillas are such a lovely breed. I would recommend using a reputable breeder, and pet insurance is a must. Keep on top of grooming and Chinchillas will bring such happiness into your life.