Colours A variety of colours, plus tortoiseshell, tabbies (classic and mackerel patterns) with or without silver, shaded and smoke colours, bi-colour and parti-colour (solid/tabby/tortie/shaded/smoke colour with white)

fb46492d-8dff-45c9-a63a-273578c5446a
With their sweet temperament, bushy tails and longhaired shaggy coats, Maine Coon cats are one of the most recognisable and popular domesticated cat breeds, ranking third most popular in both CFA and GCCF registrations.

Even before the first official cat shows were held in the United States in the 1890s, they appeared in special competitions at agricultural shows in New England in the 1860s.

A natural breed, it was named the official state cat of Maine, where it originated, and was highly prized as a hunter of vermin. They evolved as sturdy working cats, with their physique and coat suited to the climate of the region. At the first major cat show held in the United States, at Madison Square Garden in New York in May 1895, a brown tabby Maine Coon female called Cosey was chosen as ‘Best Cat’. The silver collar and medal awarded to Cosey is now on display at the Cat Fanciers Association (CFA) headquarters in Ohio.

With the rise in popularity of the glamorous Persian in the early 20th century, the Maine Coon fell out of favour and in 1959 they were declared extinct by CFA. However, reports of the breed’s demise were greatly exaggerated, enthusiasts had continued to keep the breed, especially in rural areas. During the 1940s and 50s, one person in particular, Mrs Ethelyn Whittemore, of Augusta, Maine, maintained careful hand-written records of her cats and their progeny — her family had always kept the breed — and Whittemore cats were acquired by other catteries interested in promoting and maintaining the breed. In 1976, their perseverance paid off when the breed was accepted for championship status by CFA.

The Maine Coon did not appear in the UK until 1984, when Mrs Pat Brownsell of the Patriarca prefix imported five from the USA and Germany. In 1985, the Maine Coon Cat Club was founded, a standard of points was drawn up, and Governing Council of the Cat Fancy (GCCF) granted Preliminary Recognition in 1988, and eventually championship status in 1993. 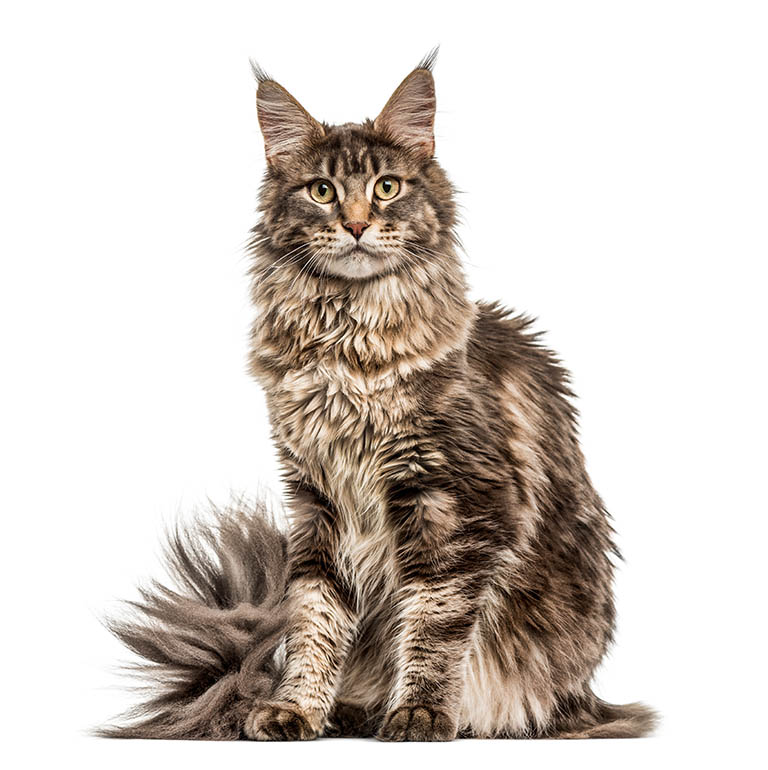 How big to Maine Coons get?

The breed is large, long haired and handsome, and the biggest domestic breed to be recognised by GCCF. They are weighty and muscular, females can weigh 12 pounds whilst males can weigh up to 18-20 pounds.  The Guinness World Records title for the longest cat is a Maine Coon called Barivel, measuring 120cm (3ft 11.2 ins) from nose to tail tip!

They have a medium length head with fairly full cheeks and high cheekbones; the muzzle should be square and the chin firm. In profile, they have a shallow concave curve at the bridge of the nose.

The ears are a great feature, being large, tall, and wide at the base, set high and usually with long tufts at the tips.

Their eyes should be full and round with a slightly oblique aperture and set; the permitted colours are green, gold, or copper, although odd or blue eyes are permissible in white cats.

A strong neck leads to a long rectangular body with a broad chest which is amplified by having hair longer on the stomach.

The legs have substantial boning and the paws are large, round, and tufted. The tail must be long — at least the length of the back — wide at the base and tapering to the tip.  The Maine Coon is slow to mature, taking up to four years to fully develop.

The coat consists of an undercoat covered by a more substantial glossy top coat. The fur is shorter on the head, neck, and shoulders, and increases in length down the back, flanks, and tail. They should have full shaggy breeches and belly fur. A frontal ruff begins at the base of the ears, and is heavier in males than females, and the tail fur is long, profuse, and flowing.

The breed is recognised in a variety of solid colours, including black, white, tortoiseshell, tabby (orange) colours in classic and mackerel patterns, with or without silver. Shaded and smoke colours, bi-colour, and parti-colours are also recognised. However, they can be found in a whole range of colours and patterns.

Because they have a long, thick, shaggy coat, they will require regular grooming to keep the coat in good condition and prevent knots and mats. They can shed quite heavily in the spring, when extra care will have to be taken to ensure any old, dead coat is removed. 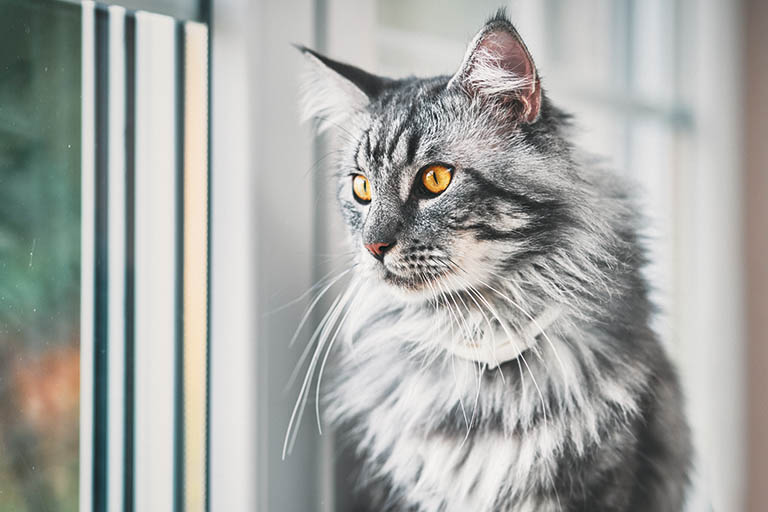 They have a personality to match their size. They are high energy and, because of their large size, need plenty of room to play and work off their natural hunting instinct. An assortment of toys and a very strong climbing frame that will support their weight and enable them to access high places will be appreciated.

Like all other cats and kittens, they enjoy a snooze and will search out the most comfortable spot. Often known as ‘the gentle giant’, their temperament belies their size, for they are gentle and friendly, as well as playful. They make wonderful family pets as they enjoy being involved in whatever is going on with their humans and form strong bonds with their family. Maine Coons do not cope very well as an only pet or if their owners are out all day. Their above average intelligence does makes them easier to train.

They have a quiet chirping voice, although they can also yowl when demanding food. They like company and will bond well with another cat or the family dog. Retaining their playful ways throughout their life, they are an affectionate and fun companion.

Meet the Instagram famous Maine Coons Artemis and Apollo to find out more about owning a Maine Coon and their unique characteristics. 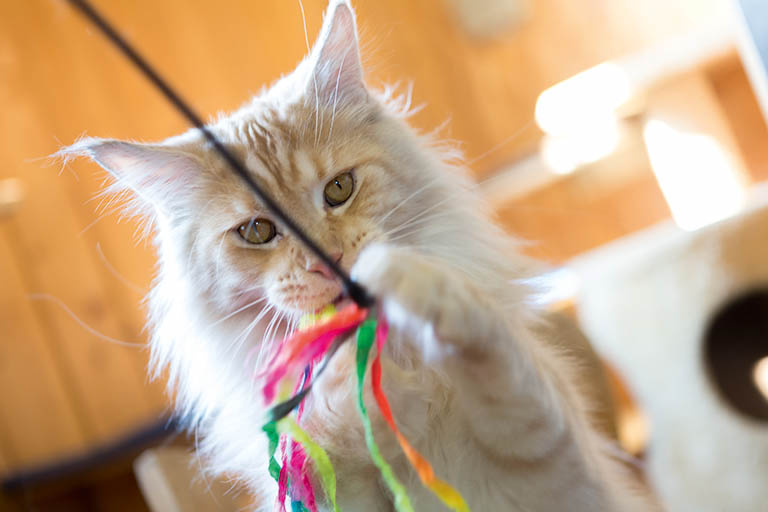 Their large ears should be regularly checked to ensure they are clean. Care should be taken with their nutrition as they can have a tendency to become overweight.

How long do they live?

They are generally a healthy breed, with a life expectancy between 10 – 15 years.  However, the breed is affected by two hereditary health problems:

● Hypertrophic Cardiomyopathy (HCM)
— a condition characterised by the thickening of the heart muscle, resulting in a reduced volume of blood that the heart can pump with each contraction, which can lead to heart failure.  There is a DNA test for HCM in Maine Coon cats, and it is also possible for cats used for breeding to have an ultrasound scan of the heart.

● Hip dysplasia — there is no simple gene test for this condition. However, breeding cats can be X-rayed to assess the conformation of the hip joints prior to being used in a breeding programme.

Before buying a Maine Coon kitten, ask the breeder to see proof of the DNA test for HCM, as well as the scans of the heart and hips.

How much do they cost?

The Maine Coon price is forever changing, as is the price of all purebred cats, one thing that is constant is that they are not cheap. In the UK you can expect to pay anywhere from £750 - £1,000 (US it is closer to $1,000 - $2,000), there are a few things that can effect this price such as sex, colour and buying from reputable breeders. Remember, this is just the initial cost there will be extra costs throughout their lives such as cat food, toys, vets fees, neutering, etc.