How does my cat see the world? Have you ever wondered if cats can see in colour and whether they view the world differently to us? As you might expect, cats' senses are superior to our own. Let feline expert John Bradshaw explain...

If you ever get the feeling that your cat knows something you don't, then you're probably right. Cats share our houses with us, but their idea of what 'home' means is not quite the same as ours - overlapping, of course, but nevertheless distinctively different.

The obvious disparity in height - most of the time cats live nearer the floor than the ceiling - has some effect, but mostly what separates us is the way in which our senses work. Not that there is any evidence of cats having any kind of 'sixth sense', though they may occasionally give that impression.

They use the same five senses that we do - sight, sound, smell, taste and touch - but our cats' senses are tuned differently to our own. Working together, their senses build a distinctive version of their surroundings. This overlaps with our own, certainly, but with some details missing, and including many others that we either ignore as irrelevant, or are even totally unaware of.

I've been trying to imagine what it must be like to be a cat for the past 30 years, and although I now concede that this is ultimately an impossibility, I'm convinced that unlike us, cats pay more attention to odour than to vision. We dream in pictures: perhaps cats dream in smells.

Which colours can cats see?

As humans, we are intensely visual creatures. First and foremost our brains want to know what something looks like: what it sounds, feels and smells like may sometimes be important, but what we generally remember most vividly is visual appearance. And as I've just done here, we routinely use visual metaphors as ways of describing our experiences and emotions.

We are colour junkies: we surround ourselves with objects of every hue; we discard gadgets with black and white screens as soon as a colour version becomes available. As such, it's not easy for us to put ourselves in the position of an animal that barely sees colours at all, yet this is precisely how cats see things - mainly in black and white.

Cats can distinguish some colours, however. Their eyes are sensitive to greens and blues, but hardly at all to yellows and not at all to reds. Yet however incomprehensible it may seem to us, they don't seem to pay much attention even to those colours they can see.

Training a cat to ignore a blue bowl and always to eat from a green one is extremely difficult: many will just keep going back to the place where the green bowl used to be, oblivious to the fact that it's been replaced by an (empty) blue one. As far as cats are concerned, the world around them is more or less black and white.

There are a few colour-sensitive cone cells on their retinas, but these are greatly outnumbered by rod cells, which are insensitive to colour but very sensitive to light - we, too, have rods, but ours only start working when it's dark. Cats have many more rods than we do, and these are connected together in bundles to maximise their efficiency. This means that even when even the merest speck of light enters a cat's eye, his brain gets to know about it.

Cats' eyes have another feature that enables them to see well in the half-dark. Compared to the size of their heads, their eyes are exceptionally large; almost as big as our own in absolute terms. Correspondingly, their pupils are huge, letting in as much light as possible. Also, behind their retinas lies a greenish reflective layer, the tapetum, which catches any scrap of light that has somehow missed all the rods on the way through, and reflects it back for a second chance of being detected - although even this is not 100 per cent effective, as shown by the spooky 'eye-shine' of a cat caught in the glare of a headlight.

Cats' eyes are also very sensitive to movement. Their retinas are wired up in such a way that they can instantly detect anything that is moving across their field of vision, without their brains having to compare each 'picture' with the previous one. Moreover, these pictures are 'taken' more frequently than ours: cats' brains construct about 60 pictures every second, more than twice as fast as occurs in our brains.

For this reason, cats probably see TV pictures as flickery, although less so with modern flat-screens, which fade one picture into the next, than with old-fashioned televisions, which go dark between each picture.

Their sensitive vision comes at a cost. The retinas are so delicate that if cats had round pupils like ours they'd have to keep their eyes closed in bright sunshine. To overcome this disadvantage, instead of closing to a small circle like ours do, cats' pupils close up almost completely on a sunny day, forming a slit with a tiny hole at each end that still allows them to see (although despite this, cats often blink in bright light, as though they found it uncomfortable).

Cats' eyes are also too large to be easily focused, especially at close range, which is where their whiskers, part of their sense of touch, take over.

How do cats use their whiskers and paws?

Cats' whiskers are not just very sensitive to touch, they can be swept back and forth to build up a profile of whatever is - literally - in front of the cat's nose. In shorthaired cats, they also grow to precisely the right length to gauge the width of narrow openings. And as well as the prominent whiskers either side of their noses (technically known as mystacials) cats also have less obvious but no less useful tufts of whiskers on the sides of their heads (also used to warn the cat that his head is going through a narrow opening), and others above and protecting their eyes, and on their wrists, front and back.

The hairiness probably makes most of the cat's skin less sensitive than ours, but the bare skin on the pads underneath their feet is very sensitive, as are their claws - which probably explains why so many cats object to having their paws touched. This concentration of touch receptors around the paws is a legacy of the cat's past life as a hunter, when he needed to be able to know precisely how to handle his struggling prey. Likewise, the long canine teeth are well-equipped with nerves that help the cat to position his bite accurately. Even though such skills are irrelevant for today's pet cats, they would have been crucial to their ancestors' very survival. 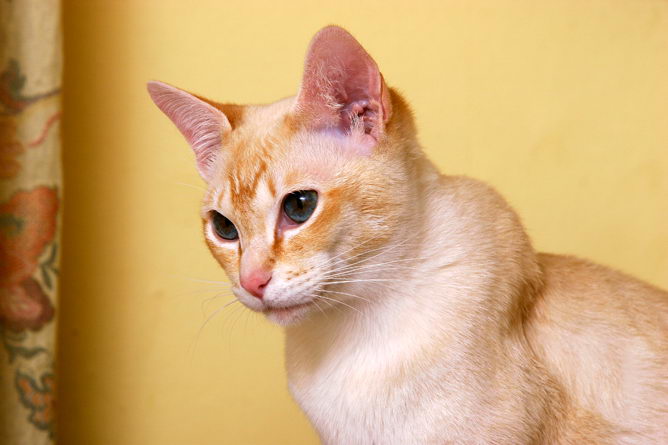 How much can cats hear?

Our cats can hear much more than we can. Unlike their eyes, cats' ears are in proportion to the rest of their bodies, which means they should be too small to respond to low-pitched sounds - men's voices, for example - yet it's a fact that they can. The 'how' has been discovered only recently: it's due to a tiny ridge in the bones behind the eardrum which alters the way the air trapped there vibrates, extending the cat's hearing range downwards almost as far as our own.

Very low-pitched sounds can also be picked up as vibrations in the ground, through the sensitive pads on the feet (an ability which cats share with elephants!). Cats can also hear very high-pitched sounds, including those, like the squeaks of bats, that we can barely detect, especially as we get older and our ears lose their youthful sensitivity. Although such an ability seems like a super-sense to us - which is why we refer to these noises as 'ultrasound' - an ear as small as a cat's can detect them easily.

The mice that are the cat's traditional prey can hear higher still, but luckily for cats (and not for them) mice often converse with one another using ultrasound. Cats can therefore eavesdrop on each mouse's squeaks and use these to track it down.

Cats' sensitive ears are probably irritated by the noise of household appliances, many of which emit quantities of ultrasound. It's been found that dogs kept in kennels with steel gates eventually lose some of their hearing after being deafened by the daily clanging of metal on metal, and their ears are no more sensitive than cats'. 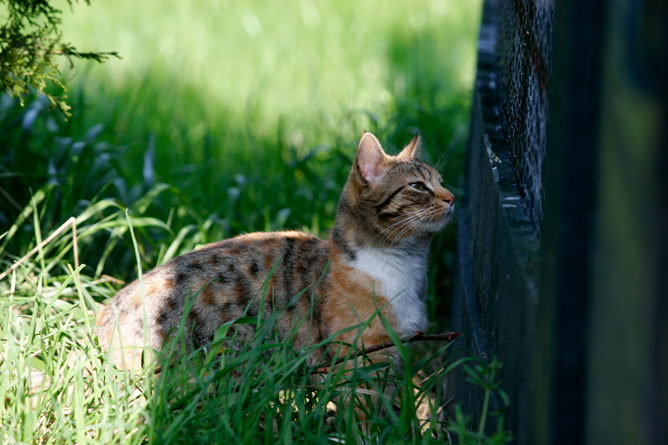 The cat's sense of smell

We admire dogs for their acute sense of smell, and humans have harnessed their olfactory abilities in many ways, from hunting to seeking out contraband. Probably because cats are not so easy to train, their olfactory abilities have largely gone unrecognised, but while not as sharp as those of dogs, their noses are about a thousand times more sensitive than ours. This means that even while they may seem to us to be aimlessly ambling around, cats are picking up all kinds of odorous information that we are completely oblivious to.

The characteristic smells of commercial cat foods are added as much for our benefit as they are for the cats. Fresh raw meat has little odour so far as we are concerned, but cats can undoubtedly get a great deal of information from its aroma, for example about how fresh it is.

Cats may also make use of odours in ways that we know little about, for example in finding their way, or locating the best places to hunt for mice and rats, both of which routinely deposit scent marks along their regularly used paths. Cats also leave scent-marks that convey information to other cats, but they don't only use their noses to decode that information. As well as being able to sniff at smells with their noses, as we do, cats also have another set of olfactory equipment which lies between their nostrils and the roof of their mouths. Known as the vomeronasal organ, this is only brought into play when the cat's nose detects the smell of another cat. The regular nose samples every intake of breath, but the vomeronasal organ is usually kept closed.

When it is needed, the cat curls his top lip upwards, opening the ducts that connect it to the mouth, and the odour can then be drawn in, dissolved in saliva. A cat that pauses next to a twig sticking out at headheight, seemingly lost in thought, is most likely savouring the aroma of a scent-mark left behind some hours before when a neighbour's cat rubbed his cheek gland against it. Because of our insensitivity to these cheek marks, most of us are barely aware that they are there at all, but to cats these must convey vital information as to what the other cats in the neighbourhood have been up to, and when.

We do know, however, that a cat's mood can be profoundly affected by such odours, as witnessed by the various commercial products, mimicking cheek gland secretions, that are available to keep cats calm and free from stress. Thus odours play much more of a part in cats' lives than many owners imagine. Quite what cats make of the current fashion for plug-in air fresheners is a mystery probably best not revealed!

Nevertheless, they seem to be able to adapt to our penchant for what to them must be rather overpowering, cartoonish fragrances, from fabric conditioners to colognes. Luckily for us - otherwise there would probably be no such thing as a pet cat - their senses of vision and hearing, while distinctly their own, overlap with ours to a great extent, enabling us to converse with our cats and enjoy a relationship of (reasonably!) mutual understanding.