We often think that training our cats to use the cat flap is something that is not necessary because they will learn of their own accord. This is certainly true for some cats, but for others, learning through trial and error on their own may take a long time and some may be too timid to attempt to push their head against a strange piece of plastic.

Others may learn very quickly that they can pop through the cat flap to gain access to the garden. The enticement of the outdoors is often so great that these cats are willing to keep trying, pawing and pushing the flap until they learn it can be moved enough to get out. The reward for such behaviour is being outside and thus if this is something your cat really enjoys, he is likely to do it again and again.

However, some cats don't learn so well that the cat flap also moves in the opposite direction and that they can come back into the house through it. It may be that being inside is not as rewarding for them as the great outdoors, or they learn that if they just sit outside and miaow, you will open the door for them and so they don't have to learn how to come back in through the cat flap!

For those with a cat or kitten with no experience of using a cat flap, training can ensure it's a positive experience and that he can use it to both exit and enter his home.

If you are about to install a cat flap for your new cat or kitten, this is the perfect chance to practise cat flap training within the home before introducing him to the garden. When you move your training to involve using a cat flap leading to the outdoors, it is a good idea to ensure you have also been practising your recall training with your cat. Once your cat goes through the cat flap to the outside, you will need recall skills to get him back at your request.

Introducing a cat flap to your cat

For kittens, small or timid cats, pressing their head against the flap can take quite a bit of effort, so there are a few tricks we can use to help start training. The first is to keep the cat flap fully open with a piece of string taped to it. This way, all your cat has to learn initially is to go through the hole. You can utilise many of the skills we have previously learnt in our other cat training articles.

The first is 'luring' - placing your cat's favourite toy or food treat in the cat flap opening so he is drawn to the area. When he then willingly explores the cat flap, he will find something he really likes there - this will make the association that going near the cat flap is a positive thing and consequently, he'll be likely to do it again.

If he is a little wary, you could make a little trail of food treats leading to the cat flap with a super tasty reward awaiting him at the cat flap. You could also use one of his favourite wand toys or a toy tied onto a piece of string - drag this through the cat flap until the toy ends up at the opening. Make sure you let him eat the food reward or play with the toy when he reaches it. Also reward any sniffing, facial rubbing or pawing at the cat flap with your cat's favourite rewards. 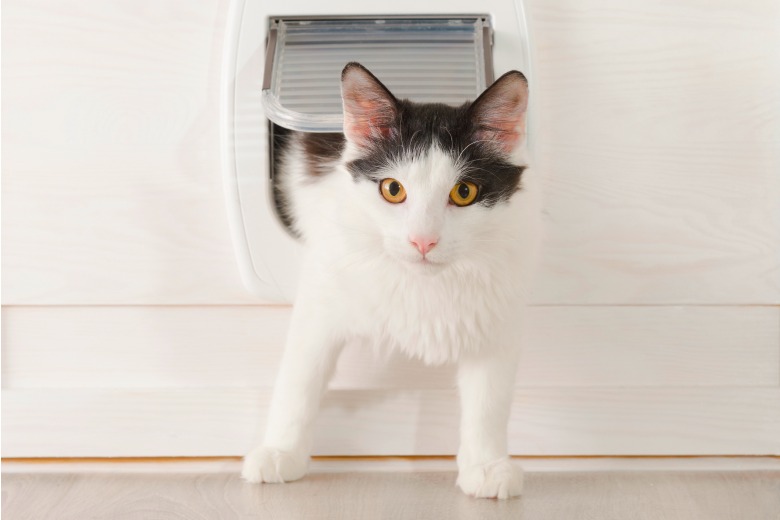 Once your cat is comfortable eating or retrieving a toy from the opening, it's time to teach him that it is also a pleasant experience to go through the opening, while you still hold it open for him.

As soon as he has gone through the cat flap, reward with more treats, praise or a game with a toy - whichever your cat prefers most. If you are training with your cat flap inside and not in situ, make sure the flap is held firm and cannot fall over and startle your cat. Also, make sure you practise with your cat going through the opening from both sides.

Training your cat to push the cat flap

The next step is to lower the flap over the opening and teach your cat to push it with his paw or head. Cats have differing preferences: some push the flap open with a paw and then push their head through, while others just push with their head. Allow your cat to use the method he prefers.

Some cats may find the step from fully-open flap to closed flap too difficult and you can help by placing a clothes peg on the flap to open it slightly, making sure it is placed on the side that the cat isn't pushing from so that he can still get through. Alternatively, simply hold the flap open a little. The peg is good if you want your cat to practise using the flap when you are not there. Some cats may still need the use of lures (toys or food going through the flap opening) to go through, while others may now go through if they see you with a toy or treat on the other side.

Training your cat to ignore the noise of the cat flap

The cat flap is likely to make a noise as it opens and shuts. Some cats do not mind this at all, while more sensitive cats may find it a little strange at first. For such cats, it is good practice to gently push the cat flap open and shut yourself so your cat gets used to the noise - if he remains happy, reward him. If he appears a little anxious about this, wait until he is content again and push the flap much more gently so the noise is only slight - if he then remains happy, reward him.

We are teaching your cat that such a noise is not scary and signals that a treat is coming. Practise both these tasks (getting your cat used to the noise of the flap and going through the cat flap when the flap is partially open) several times, and in both directions, until your cat is confident going through.

At first, if you are using a food treat to lure your cat through the cat flap, you may want to place it very close to the flap so that he may push his head through, eat the treat and then pull back to remain on the same side. As you gradually move the treat further and further away from the flap, your cat will realise he has to go completely through the opening to get the food treat.

The final step is to remove the peg or your hand holding the flap open, and practise with the flap completely closed. Be patient: cats sometimes take time to think things through and therefore may not do things immediately. If you have practised all of this with the cat flap in the house, it is now time to install it and practise again with the flap in situ. With time, patience and plenty of rewards, your cat will soon learn to be a master of the cat flap!